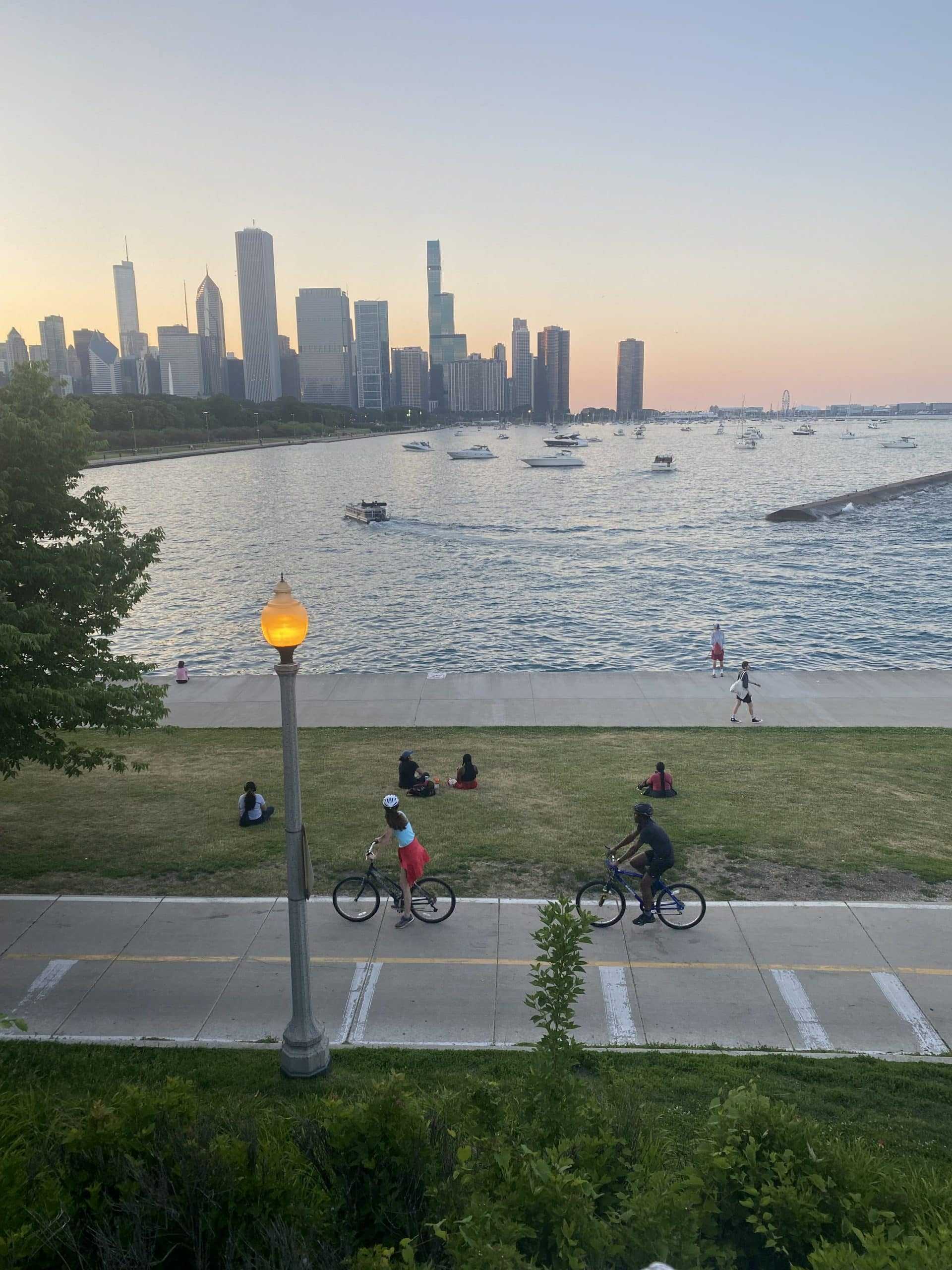 Riding a bike is undoubtedly the best way to see any major city, but Chicago is especially easy and safe to navigate. With bike lanes on many major roads, beautiful parks, and plenty of neighborhoods to explore, renting a bike for day gives you access to more of the city while also offering opportunities to truly connect with the community.  The most popular way to bike in Chicago is on the Lakefront Trail – and for good reason! There’s over 18 miles of paved trail to see, spanning from the north side of Chicago all the way to the South Shore. The road clearly marks where pedestrians and bikes are allowed, making this one of the safest routes to ride on.

The Lakefront Trail is the best way to experience the city not only for the optimal bike safety conditions, but also for the personalized experienced every rider can have. Anywhere you stop on the trail is sure to introduce you to a new neighborhood with interesting history, delicious food, and new culture. Additionally, the trail offers unique views that you won’t get anywhere else. From the the beaches of the north side, which give a front line view of the John Hancock, to the Museum Campus, which give a full skyline view, the beautiful Chicago can’t be missed.

Starting from the north side of the trail in Edgewater, riders will glide by Foster Beach before coming upon Montrose Beach. Exit the trail and head a few blocks west to enter the neighborhood known as “Little Vietnam” by the Asia on Argyle Red Line station. Rolled ice cream and bubble tea are great energy boosters to begin those next 17 miles.

After getting back on the trail, everyone can admire the Jarvis Bird Sanctuary located on the trail, while Cubs fans can ride down Addison for about five minutes until they hit Wrigley Field.

The next major stop is Lincoln Park. While the entirety of the park is worth admiring, the Lincoln Park Zoo is a completely free Chicago must-do. After seeing the zoo, before getting back on the trail, bike south through the park to see the Nature Boardwalk. Don’t miss the little-known garden near the entrance of the boardwalk: It has plaques with Shakespeare quotes mentioning plants and flowers, with the actual plants and flowers around them.

Head back to the trail via the underground tunnel near North Avenue Beach, until you get to Navy Pier. Navy Pier is a great place to grab lunch or shop around for some Chicago merchandise. Ride the Centennial Ferris Wheel, eat some deep dish pizza, or just walk along the pier to admire the water.

When going through Museum Campus, take a short detour to the front of the Shedd Aquarium for some Rainbow Cone ice cream, a Chicago tradition. Ride down Solidarity Drive to get a million dollar view of the entire Chicago skyline right in front of the water. Also be sure to look out for Soldier Field, where you can see both the original building and the new additions (which some people say resemble a UFO!)

After passing McCormick Place, take a short break from the biking to head into Chinatown, only a few blocks west. In addition to food delights like dumplings and bubble tea, Chinatown houses Ping Tom Memorial Park, a park on the Chicago River with Chinese architecture to stand out against the rest of the city.

Once you get to Burnham Park, Sox fans can have their moment by biking a little over 2 miles to Guaranteed Rate Field, then get back on the trail.

While the Museum of Science and Industry can easily be seen looming next to the trail, continue past it and into the Garden of the Phoenix, a gorgeously luscious Japanese garden filled with waterfalls and footbridges. Spend time exploring the entirely of the island the garden is located on, and the Jackson Park cherry blossoms.

Just a few minutes after rejoining the trail from the Garden of Phoenix, your journey is over as soon as it’s begun! The end of the trail (or beginning, depending on where you start) is in the neighborhood of South Shore. The lakefront area where the paved way ends has a beach for cooling off and the beautiful South Shore Cultural Center. Before you turn leave the trail, though, be sure to take a look at the view of the city from the south and compare it to the north side where you started.

And that’s your best bike riding day in Chicago! Feel free to customize your ride to your interests. And if the Lakefront Trail doesn’t seem like your thing, the Bloomington Trail on the north side of the city offers a shorter 2.7 mile elevated paved ride on what used to be a train railway. In addition to being shorter, this ride truly takes you through neighborhoods, which avoids the problem of needing to exit the trail to be immersed in the community.